Work to widen the A3022 Newton Road in Torquay, between Shiphay Lane and Lowes Bridge has started. The scheme will see Newton Road widened to create an additional lane for traffic heading towards Riviera Way. The £1.7m scheme is being funded by The Heart of the South West Local Enterprise Partnership (LEP) and Torbay Council, and is the final phase of £3.4m of improvements identified under the Torquay Gateway Project

Advanced works commenced on 5th October to replace the life expired traffic signals at Shiphay Lane, as well as minor improvements to the pedestrian crossings at the junction. The carriageway will also be widened and resurfaced between Shiphay Lane and Regents Close. These works are due to be completed early in the new year.

The main works to widen Newton Road will start in January 2021, and these works will see the carriageway widened into land alongside the railway line, helping to create an improved bus stop and left turn lane towards the hospital. These works will also see improvements to the highway drainage, including the provision of storm water retention systems. The traffic signals at Regents Close and Woodland Road junctions will be replaced, and improvements made to the pedestrian islands on Newton Road. The carriageway will be resurfaced from the advanced works up to the junction at Lowes Bridge.

Cllr Mike Morey, Cabinet Member for Infrastructure, Environment and Culture for Torbay Council, said, ‘The implementation of this highway scheme is a major investment into one of our main traffic routes in and out of Torbay. The Torquay Gateway Scheme is a series of transport improvements, which have included investment into walking and cycling facilities in the area, as well as traffic improvements, such as this one and I am pleased to see this important final phase of the project get under way.

“Unfortunately works to improve this busy transport route will result in some disruption to traffic, for which we apologise and efforts will be made to minimise this where possible. The end result however will be a positive effect to journey times along this route, linking to the benefits we already have from the South Devon Highway.”

Karl Tucker, Chair of the Heart of the South West LEP, said: “This is the final phase of the Torquay Gateway scheme, which opens up key sites in Torbay for existing and planned employment, while reducing journey times and increasing journey time reliability. The Growth Deal funding invested in this project is anticipated to generate 720 new jobs 734 new homes. The works will also provide more confidence to inward investors, aid existing businesses and encourage new investment in new commercial and housing schemes.”

The scheme is due to be completed in autumn 2021. Full details of this scheme can be found on our website here.

The Heart of the South West LEP Growth Deal 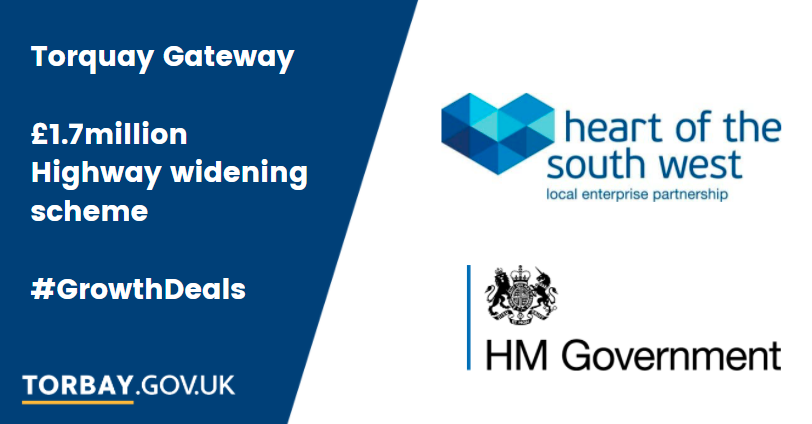