Remembrance Sunday commemorations will be very different this year due to COVID-19, but Torbay Council wants to help you commemorate the occasion in the safest possible way.

Although for safety reasons, services are unable to take place in their usual format, there are a range of other ways people will be able to commemorate both Remembrance Sunday 8th November and Remembrance Day itself on Wednesday 11th November.

In common with other parts of the country, COVID-19 cases are on the rise in Torbay. To help prevent the spread of the virus, the Council has made the decision not to undertake a full Remembrance Service and Parade this year at the War Memorial in Princess Gardens, Torquay.  Instead, there will be no Parade and we will be holding a small Service by invite only with limited representatives, who will lay a wreath during the service.

Torbay’s Armed Forces Champion Councillor Nicole Amil said: “Our Armed Forces have made immense sacrifices, both during the Second World War and in more recent times, so it’s essential that we take every opportunity to recognise what they did for the freedom we take for granted. It is with sincere regret that we cannot commemorate Remembrance Sunday in the usual way due to the ongoing pandemic but there are still many ways everyone can show their respect.”

Maggi Douglas-Dunbar, Civic Mayor of Torbay Council, said: “We are calling on residents to show their support for Remembrance Sunday but mark the occasion safely – you can watch the national ceremony live on TV, mark the two minute silence at 11am from your own doorstep as suggested by the Royal British Legion, or why not donate to them and download one of their poppy posters to put up in your window?”

Leader of Torbay Council Steve Darling said: “Remembrance Sunday is a chance for all of us to remember those who gave their lives, so I encourage Torbay residents to get involved in a safe way from their own homes.

“This year will be particularly poignant for me as my great aunt Muriel was a serving wren in the Second World War, who sadly lost her battle against the covid virus earlier this year.”

To ensure everyone’s safety we will be discouraging people from attending the Service and asking them to watch the National Service from their own homes.

Ways you can commemorate Remembrance Sunday at home

Watch the national Service of Remembrance on TV – Usually around 10,000 people pay their respects at the Cenotaph but his will be a closed event this year and the government has asked people to stay away due to Coronavirus. It will, however, be televised live on Remembrance Sunday 8th November BBC1, ITV and Sky News including the minute’s silence at 11am. 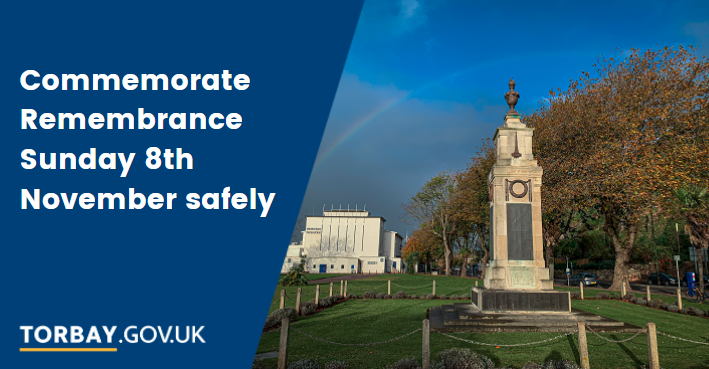