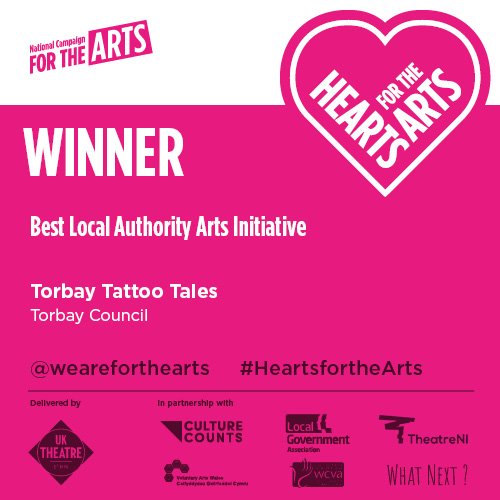 The winners have been announced for the National Campaign for the Arts' (NCA) Hearts for the Arts Awards 2019. These awards celebrate the unsung heroes of Local Authorities who are championing the arts, often within a climate of severe financial challenges.

Discussing Torbay Councils nomination, judge Les Dennis, said: “WOW! What a great idea. Watching the film totally changed my feelings about tattoos. Listening to people explain how they use body art to express grief and so much more, was beautiful and inspiring.

“I will look at tattoos in the future as a wonderfully expressive form of art and wonder what story it is there to tell. This project is a winner for me – it definitely stands out as innovative and far-reaching. Outstanding example of innovative thinking connecting different members of the community to the museum and each other.”

Torbay’s Elected Mayor, Gordon Oliver, said: “We are elated that Torre Abbey Museum has won this prestigious national award. Torbay Tattoo Tales was in part funded by the Heritage Lottery Fund (HLF) and thanks should go HLF and to all those who supported the project. A special thanks goes to the team at Torre Abbey that work very hard to make the museum a hub that can be filled with vibrant cultural activities all year round.”

Executive Lead for Tourism, Culture and Harbours, Nicole Amil said: “This is fantastic news and so well deserved, I am so proud of the team at Torre Abbey Museum. In recent years, the museum has been growing as a centre for culture with a wonderful rolling programme of exhibitions and events. Torbay Tattoo Tales encapsulated a range of wonderful stories from local people regarding why they had chosen particular body art.”

The winners were chosen by a panel of key arts industry experts and practitioners, including:

For more information on the winners visit forthearts.org.uk/campaigns/hearts-for-the-arts/