Blood in your pee? People living in South West could be at risk by not looking for an important sign of bladder and kidney cancer

Torbay Council’s Public Health Team is supporting Public Health England’s new ‘Be Clear on Cancer’ campaign in the South West which is highlighting blood in pee as a key symptom of bladder and kidney cancers.

The campaign will encourage everyone to ‘look before they flush’ and visit their GP without delay if they notice blood in their pee, even if it’s just once. A new survey reveals that only 16% of adults aged 50 and over (those most at risk of these cancers) in South West say they check the colour of their pee every time they go to the toilet. If people don’t look before they flush, they may not notice blood in their pee.

A new short film featuring TV doctor, Dr Dawn Harper, is being released as part of the campaign. The film shows what to look out for as the colour of blood in your pee can vary – from very diluted, to bright red or even dark brown, like the colour of weak black tea. Blood in pee is a symptom in almost two thirds (64%) of all bladder cancers and around a fifth (18%) of kidney cancers.

Blood might not appear every time, so it is important that people seek medical help even if they notice it just once. Worryingly, around 44% of those surveyed in South West said they would not seek medical advice if they saw blood in their pee just once, however, 43% of those surveyed said they would wait and see if it happened again, potentially putting off a vital diagnosis.

When asked why they would not go to the GP straight away if they noticed blood in their pee, some concerning delays for seeking help were uncovered; 21% in South West say they would be worried about wasting the GP’s time and 23% would only book an appointment sooner if they had other symptoms.

Executive Lead for Health and Wellbeing, Jackie Stockman, said: “The South West statistics are worrying and show that not only are over 50s not checking their pee after going to the toilet, 44 percent would not seek advice if they saw blood in they pee just once.

“We know that if bladder and kidney cancers are picked up early, people are more likely to have better outcomes and ultimately that saves lives. I would urge anyone who sees blood in their pee, don’t wait for it to happen again before getting it checked out, visit your GP straight away.”

Dr Dawn Harper, TV Doctor and GP, said: “I’m urging people to be vigilant to changes in their body and to check their pee. I hear all too often about people who have delayed seeking medical advice if they have worrying symptoms – like blood in pee – because they are afraid of what the doctor might find or what the treatment might be.

“If you do notice blood in your pee, it’s probably nothing serious, but it’s always worth checking with a health professional – you won’t be wasting their time. It’s vital that people don’t put off getting help; if it is cancer, early diagnosis saves lives.”

Professor Chris Harrison, National Clinical Director (Cancer), NHS England, said: “The earlier people are diagnosed, the better their chances, which is why it is vital people understand what to look out for and when to visit the GP. This campaign has the important aim of helping raise awareness of the signs and symptoms of bladder and kidney cancer and encouraging people to visit their GP after seeing blood in their pee.”

The ‘Be Clear on Cancer’ ‘Blood in Pee’ campaign runs until Sunday 23 September and includes advertising on TV, radio and in washrooms and online. For further information about the signs and symptoms of bladder and kidney cancer, search ‘Be Clear on Cancer’. 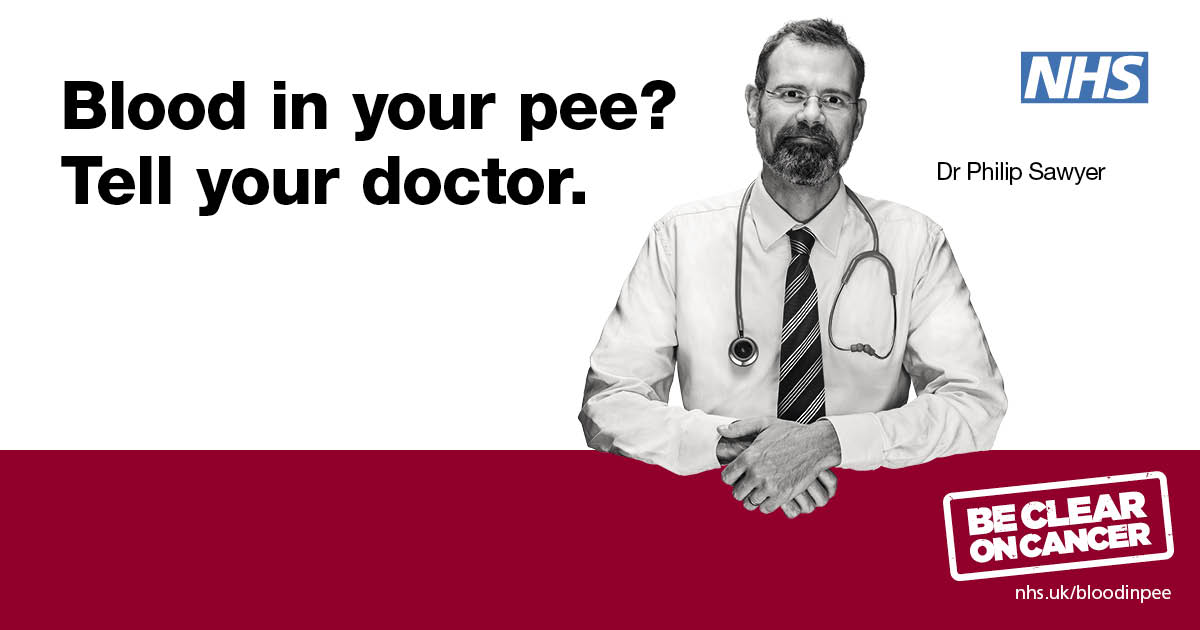