Torbay Sports Awards 2018 – Celebrating the strength and depth of sport and healthy living in Torbay. 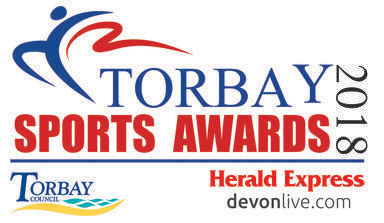 It has been a great week for cyclist Karl Allen-Dobson. First of all he was named the Overall Torbay Sports Personality of the Year 2018 at the Torbay Sports Awards – and on Monday he was invited to defend his two Invictus Games gold medals in Sydney later this year.

The 35-year old was injured in a bomb-blast in Iraq during his career in the Army, and used cycling to get over the trauma of the event.

Last year he was invited to take part in the Invictus Games in Canada and came home with two gold medals.

“The cycling team is stronger and more experienced this year”, said Karl. “We have more potential to be winning medals throughout the categories”.

Karl became the 2018 Torbay Sports Personality at the Riviera International Conference Centre last Thursday – after winning the Parasport category and being shortlisted in the Senior category, which was won by England under-20s women’s rugby star Lillian Goddard.

Around 200 people of all ages enjoyed the evening of celebration.

Saluting success both on and off the field was at the top of the agenda as stars of today, tomorrow and volunteers who make sport possible were honoured at a gala dinner and awards night.

The awards- which were taken back under the wing of Torbay Council and Physical Activity Officer Kirsty Parker-Calland, with the Town Hall events team, and the Herald Express as media partners – were declared a resounding success.

The bar was set for the night with an energetic and lively display by the South Devon College Fitness Instructors Training Academy at the start of the awards. The inspirational guest speaker was Paralympian Dave Hill.

Herald Express editor Jim Parker hosted the awards and said at the opening: “Events like these sit right in the heart of our community and recognise some people who would otherwise never be saluted or want to be saluted. It’s a night when politics, differences of opinion and factions are put to one side. A night where we recognise the very best of sport in Torbay.”

He added: “Sport and amateur sport is going through a tricky time. It would seem it is becoming more and more difficult to get people into sport, to stay in sport, and give something back to sport. But there are still loads of success stories to celebrate both on and off the field and there is still a huge band of volunteers, young and old, that are doing their bit and beyond. They are the people who will ensure sport has a future in Torbay.”

“Clubs and individuals have done us proud locally, nationally and on the world stage like the Tolchards and the Ainsley’s, but it is also about the little Johnny’s taking part in their first sack race at school that will keep sport alive in the Bay and will give just as much joy.”

Torbay Mayor Gordon Oliver said in his address: “This is our chance to celebrate and recognise the people, clubs and organisations that make sport such an important and vibrant part of Torbay’s community. The awards have now grown in stature and popularity and are a highlight and well-established date in the sporting calendar.”

“There is so much to salute out in the sporting arena, whether it involves elite athletes competing at the very highest of levels or the volunteers who work tirelessly behind the scenes. They will have all displayed dedication, passion, commitment, enthusiasm and devotion in their particular fields. We just want to say thank you to all of them.”

Parker praised Mayor Oliver for donating half of this year’s allowance to good causes in the Bay, including many out in the sporting arena.

Almost £500 was raised for the Friends of South Devon College who were the designated charity for the night.

Healthy School of the Year (sponsored by Premier)

Young Volunteer of the Year (sponsored by Active Devon)

Coach of the Year

Team of the Year (sponsored by Wollen Michelmore Solicitors)

Parasport Personality of the Year

Promising Young Athlete of the Year

Unsung Hero of the Year (sponsored by Sport Torbay)

More in Leisure, sports and community